Dog For A Day is a small, dog friendly venture run by Gill and Dave. Our two other team members are Charlie and Maddy, our  Labradoodles, who assist with walking, sleeping, eating and generally interacting with all our clients, who they prefer to call friends!

Gill previously worked for Lincolnshire County Council but left to pursue her dream of looking after dogs and she also plans to start making dog accessories.  Gill's first dog growing up was called Bob, a mixed breed who like anyone who has a dog when they were young, was a special part of Gill's life.  Gill loves (and is excellent at) cooking, reading on her Kindle, DIY and, of course, dogs!

Dave worked for the NHS for twenty years before taking early retirement in 2012.  Now he walks Charlie and Maddy every day and enjoys walking other dogs too! His hobbies are music (listening, not playing), computer coding, PlayStation, classic cars and.... dogs! 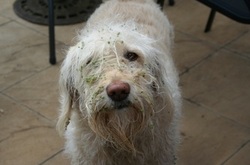 Charlie loves burrs. Well, burrs love Charlie!
Charlie is a standard Labradoodle and our first dog together. We both had pets growing up but never our own to be responsible for. Bringing her home was such an adventure, having this little bundle of fluff and learning every day about her and how to care for dogs. Charlie is a sweetheart and likes nothing better than another dog to play with or meeting new people on our walks. You would not think she is now thirteen years old as she still acts like a puppy at times. She has the Labrador 'scavenger' trait in her and loves snacks and treats which we have to be careful with but as she loves exercise too she can work off that odd extra morsel! Charlie is always looking forward to having other dogs who love playing come to stay 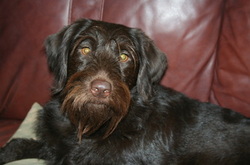 Maddy happy on the sofa
Maddy is a mini Labradoodle, who loves digging when we are walking, eating her main meal (not so bothered about snacks), barking at the postman, and, primarily, sleeping!  Maddy is a bit hyper and will bark upon first meeting another dog but once she settles down is a total sweetheart. We still see her as a puppy, but she is twelve now. She also looks forward to having other dogs to stay, although she generally just gets on with sleeping when they've arrived!